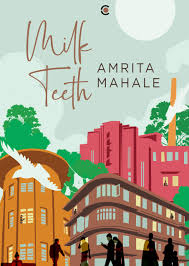 “She had tried to replace him with others, but they had only doodled, left mere doggerel on the warped pages of her heart.”

Milk Teeth by Amrita Mahale is a playlist that celebrates the songs and rhythm of the city; not just of Mumbai, but of Bombay. Reading this book is like having a 3AM conversation with the streets of the city – conversations that are raw, surreal, uncaged and free of the consciential laws of right and wrong. Milk Teeth has the audacity of revealing the secrets of the city by celebrating the honest eccentricity of its life and the diverse realities that it has given its loyal inhabitants in the most fun and comical way.

“The seesaw of their friendship had seed-and-sawed plenty, never getting a shot at the equilibrium that adulthood sometimes brings to childhood friendships.”

“There was a clarity, a certainty of purpose behind everything she said and did; it could only come from knowing your place in the world.”

One of the best parts of this novel, is its ending- it is not a normal cliffhanger, but it gives the reader the liberty to construct the fate of the novel by themselves, just the way how they construct the fate of their lives around this city. It makes you fall in love with Mumbai over and over again. And for those who remember it as Bombay, it makes you reminisce the city that taught you how to love- with its lit up Queen’s Necklace and its intolerant bustling locals, with its familiar faces at the Iranian Cafes and its memories embracing the Worli Sea Face.

I must say, at the end of this spirited novel, I found myself even closer to my city.

A handful of my favourite quotes: